In mid-August 2005, when I first moved into my apartment complex (Apartment #113), I was single and living solo for the first time EVER. It wasn’t too long after I moved in that I got into a routine: cook dinner, eat, clean up, watch television, climb into bed, read and fall asleep. What an exciting life. I’d been living there a month and I don’t know why, but I started to imagine something watching me from the bedroom door, which was facing the bathroom on the other side of the very short hallway. Of course, I brushed these feelings off as being my wild imagination because I was now living alone. At least, that’s what I suspected at first.

One night, I woke up in the middle of the night. Half-asleep, I stumbled across the hallway to use the facilities. I shut the door, took care of business and washed my hands. Still groggy, I stumbled back to the bathroom door, opened it, and took a step into a very tall and handsome man dressed up in a nice button shirt and jeans– he looked like a cowboy/vaquero. Having run into him, I immediately apologized with a quick, “Sorry, didn’t know you were there” (spoken aloud), and I backtracked into the bathroom, shutting the door behind me.

The floorplan of Apartment 113, where I almost ran into a cowboy who mysteriously appeared. The red X denotes the location he was leaning against the wall.

By now, I was substantially more awake and, needless to say, puzzled. I paused a moment to think about what had just happened. I ran through a few possible scenarios to explain the mysterious man in my apartment. I thought back to before I’d gone to bed, when I remember having locked the front door, so it probably wasn’t a real person because if it WAS, I would have heard him come in, right?… but if it was a real person and there WAS someone in my apartment, then I was in BIG trouble… only the “intruder” hadn’t done anything really. I considered my options and decided that I was half-asleep and that the man who was standing outside my bathroom door was a half-dream and half-imagination.

Putting on all my bravado, I announced that I was coming out of the bathroom and that I didn’t want to see a ghost so if that’s what I’d seen, I’d prefer it never show himself around me again but I also didn’t mind it being there. I took a deep breath and opened the door—he was gone! I then proceeded to WALK back to bed, climb between the covers, and fall asleep. (That last part took a while because my heart was racing.)

I will never know if that was my imagination or not, but for my own sake, I like to think it was, though I’m still not entirely convinced.

In the past, that was where this story ended. In February 2010, as I learned a little about the history of the area in which I once lived, I discovered a few rather interesting things that may have explained what I might possibly have seen. 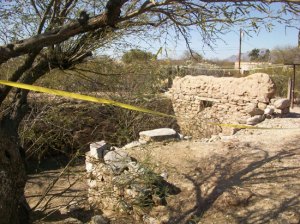 The Adobe ruins of the Fort Lowell Quarter Master and Commissary Office.

The apartment complex was near the Old Fort Lowell Historic District– Fort Lowell being an old U.S. Calvary Fort with a rich history, the main portion of adobe remains being located within a mere mile from my old apartment complex. The last living soldiers were said to have abandoned the fort in 1891. Nine years later, in 1900, the local newspapers started running articles about ghostly apparitions in the area around Fort Lowell. Though one of them, The Arizona Daily Star, wrote their article Salis Cum Grano, which according to a December 15, 1900 article written by a rival reporter for the Arizona Daily Citizen translates as meaning “to be taken with a grain of salt”. Or, “In other words the morning paper warns its readers not to take its words too seriously, thus admitting that the report of the ghost at Lowell might be true even though a doubt exists that a ghost can throw stones.” I was amused by the fact that even in 1900 there were believers and skeptics alike. Mostly, I was amazed that the story of a ghost had been published in the papers. 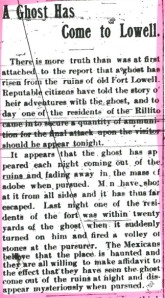 From December 1900 to April 1901, stories of the “Fort Lowell Ghost” dotted the newspaper. Reports of the ghost began with a front page column with the eye-catching title “A Ghost Has Come to Lowell”. In this story, the ghost is surrounded and shot only to miraculously vanish and leave a volley of stones in its wake. These reputable citizens claimed to see the soldier’s ghost vanish in front of them. This story was also covered by the author of the local news on page four. This reporter wrote that, after shooting at the ghost, the Mexican citizens settling near the Rillito River sent their dogs after the ghost. Subsequent stories of the Fort Lowell Ghost suggest that he was able to evade the dogs.

According to the newspaper accounts, the Fort Lowell ghost appeared nightly and around the same time each evening. The consistency of the sightings and the news reports led the paper to claim the Fort Lowell Ghost as “one of the best known ghosts in the country” by a front page article in the Arizona Daily Citizen on January 9, 1901. This article also has an account of a Mexican woman who was scared by the ghost to near death. The story read as follows:

… The most tangible evidence of the ghosts that Mr. Grindell saw was a Mexican, woman lying at the point of death of a fright she had last Thursday night. She said she went to a well to draw water and as she bent over the well she saw something white. It ascended the rope and stood for an instant on the edge of the well. It was very tall and of no describable shape, a dim outline of a human form. The woman’s agony of fear was so great that she could not faint but she watched the ghost cross swiftly to one of the dismantled post buildings. It ascended the wall and disappeared on the other side… In an instant the ghost reappeared on the top of the wall, a little ghost with it. They slid down the wall and danced away out of sight.

On January 15th, the ghost was reported as being “dead”. The newspaper cited “too many performances” as the cause of death and continued to explain that the ghost had “got run down in health and finally became so attenuated that no one could see it so in turn it gave up the ghost.” Though, maybe it had a little stage fright because of the competition from the newly revealed Tanque Verde Ghost on January 17th…

It’s difficult to assess how serious the reports of the ghost were. It’s quite evident that the newspaper staff was having fun with the ghost stories when in an article on January 17, 1901 they blamed the ghost for having stolen the editor’s bicycle. The editor scolded the ghost and asked anyone who might see a ghost riding a bike to “notify The Citizen at once.” The bicycle, miraculously, was returned the next day, though it was a little worse for wear. The ghost was an apparent fan of off-roading as there was mesquite and other desert debris caught in the chain.

Though the libelous bicycle theft was a detriment to the ghost’s reputation it wouldn’t be the first time the ghost had reportedly stolen something. An article on December 28, 1900 reported that the ghost had risen from the Fort Lowell adobe ruins and stolen a rancher’s turkey dinner.

The reports of the ghost ended in April 1901, which was around the time ownership of the newspaper changed hands. But the ghost of Fort Lowell doesn’t seem to have died. There are still stories detailing modern sightings of the mysterious ghost of Fort Lowell. While the ghost could have been discounted as a very bullet-proof squatter in the late 1900’s, it’s difficult to say the same thing for present-day Fort Lowell. The area runs through the middle of town and, while the neighborhood is being preserved as a historical site, people still live in the areas near the ruins. My apartment, for example, was literally just down the street from the old adobe ruins.

Some of the more recent reports of the Fort Lowell ghost include this story of a woman who grew up in a home near Craycroft and Fort Lowell Roads. This home is reputed to house at least one ghostly resident.

The woman’s father still lives in the home and claims to have witnessed strange events, in and around the house, over the span of more than four decades.

Most interestingly, he said that he began hearing the sounds of the wagon wheels turning, along with the clomping of the horses’ hooves upon the hard, dry desert ground. He stepped outside one day and witnessed a ghostly horse-drawn wagon, steered by spectral soldiers. The eyes of the soldiers remained focused on their destination ahead, toward Fort Lowell Park. Then, the ghostly wagon simply vanished. According to the homeowner, he witnessed this event on more than one occasion and got used to it.

After a while, when he would hear the sounds approaching, he would simply go about his business and let the wagon drive by in peace. He says that the neighbors have learned to do the same.

A US Calvary member shows off his horse. This outfit is very similar to what I thought I saw.

I was comfortable with the whole story about waking up and seeing a cowboy who wasn’t there untill I told my husband I was drafting up my story of the man outside my bathroom to post in this blog.

“Are you sure it was a cowboy,” he asked,” Because at first glance the man you described sounds like he could have been wearing a cavalry uniform.”

The period clothing of the man I saw looked very much like the uniforms worm by the US Calvary reenactors we saw at the 29th Annual Fort Lowell Day celebration. Could I have really seen the mysterious Fort Lowell Ghost? Or was what I’d seen really just a waking dream? I guess I’ll never know…