Sixty-seven year-old widow, Mrs. Mary H. Reeser, was reclining comfortably in an easy chair in her St. Petersburg, Florida apartment (1200 Cherry Street, Northeast) at 9:00 P.M. on Sunday, July 1, 1951. That was the last anyone ever saw her alive. When she didn’t answer her door 11 hours later to receive a telegram her neighbor went to check on her. What was found was quite shocking.

Sunday evening, son, Dr. Richard Reeser, and landlady, Mrs. Pansy M. Carpenter, had been visiting Mary. When they left at around 9:00 P.M. they had no idea it was going to be the last time they would see Mrs. Reeser alive.

At around 5:00 A.M., Mrs. Carpenter awoke to the smell of smoke which she assumed was from a water pump in the garage that had been overheating. The pump was switched off and Mrs. Carpenter went back to sleep.

At 8:00 A.M. on Monday, July 2, 1951, a telegraph boy woke Mrs. Carpenter. The telegraph was for Mrs. Reeser, so Mrs. Carpenter signed for it. When she went to deliver the missive to her tenant, there was no answer. She checked Mary’s door to find it was hot. Thinking the apartment had caught fire and Mrs. Reeser might be trapped inside, Mrs. Carpenter solicited the help of two painters to break the door down.

When the door was forced open, the three were hit with a blast of sweltering air. A thick, greasy residue coated the walls. As they approached the armchair, the neighbor discovered what appeared to be the charred remains of Mrs. Mary Reeser. The rest of the room, however, showed little evidence of an actual fire in the apartment.

The only portion of the apartment that was burned was the small corner in which sat the remains of Mary Reeser’s easy chair… and of Mary Reeser herself. Of the chair, only charred coil springs remained. Of Mrs. Reeser, there was little more; and these remains baffled the firemen, police, and pathologists that examined them.

Mrs. Reeser’s 170 pounds had been reduced to less than ten pounds of charred material. Only her left foot remained intact, still wearing a slipper, burnt off at the ankle but otherwise undamaged. Also found were her liver, now fused to a lump of vertebrae, and, stranger still, her skull… shrunk to the size of a baseball by the intense heat.

The remainder of the apartment showed all the signs of heat damage; from about the four foot level on up, the walls were covered with a greasy soot, a mirror had cracked, plastic switchws (sic) and a plastic tumbler in the bathroom had melted, as had two candles on a dresser, which left behind their unburned wicks and a pink pool of wax.

Below the four foot level, the only damage was the small circular burn area encompassing the remains of Mrs. Reeser and her chair, and a plastic electric wall outlet that had melted, stopping her clock at 4:20 a.m.

The FBI’s report corroborates the scene in their report of the incident as well. Their report also includes lab results– “no signs of oxidizing chemicals, petroleum hydrocarbons, or other substances used to initiate or accelerate combustion. Part of a cigarette lighter was found in the rubble. The FBI Laboratory was contacted by the police department to examine evidence.”

The official police report cited a smoldering cigarette as the cause of death. The cigarette allegedly ignited Mrs. Reeser’s highly flammable rayon-acetate nightgown and burnt the sleeping woman to ash. According to the FBI report, there was no evidence of any accelerants or chemicals being used to start the fire. But how could she have burned so completely without incinerating much of anything else in the room?

Mrs. Reeser’s story is just one of many examples of Spontaneous Human Combustion (SHC)– where a human has been found cremated with no evidence of fire except in the immediate vicinity of the deceased.

Learn more surrounding the specifics of what Spontaneous Human Combustion is as well as a scientific theory that might explain how someone could spontaneously combust in SHC Part II: The Wick Effect. 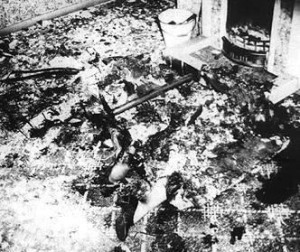 –Update April 14, 2011–
The FBI has updated their website. I could no longer find the article in question in the freedom of information archives: http://vault.fbi.gov/reading-room-index
Also, the FBI has issued the following disclaimer with respect to the FOIA:

The FBI’s Reading Room contains many files of public interest and historical value. In compliance with the National Archives Record Administration (NARA) requirements, some of these records are no longer in the physical possession of the FBI, eliminating the FBI’s capability to re-review and/or re-process this material. Please note, that the information found in these files may no longer reflect the current beliefs, positions, opinions, or policies currently held by the FBI.

The image quality contained within this site is subject to the condition of the original documents and original scanning efforts. These older files may contain processing procedures that are not compliant with current FOIA processing standards. All recently scanned images posted to the Reading Room adhere to the NARA 300 DPI standard. Therefore, we have provided the best representation of the files contained within the Reading Room for your viewing purposes.

If you’re interested in other SHC stories, you can visit these websites:
* http://www.askwhy.co.uk/analogiesandconjectures/Spontaneoushc1.php
* http://cogitz.com/2009/09/06/spontaneous-human-combustion/

3 thoughts on “SHC Part I: The Strange Case of Mrs. Mary Hardy Reeser”