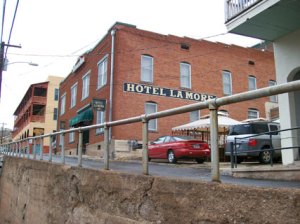 Contrary to the popular movie remake of 3:10 to Yuma, the City of Bisbee is not flat at all. Rather, it’s a mining city built on the side of a mountain chain. The city itself is overrun with stairs, tiers of buildings built at the base of hilltops or on the tops of hills and narrow, winding streets, some of which are not even wide enough for cars to traverse. The Bisbee Inn, also called the Hotel LaMore, is perched atop Chihuahua Hill (also called “B” Hill) at 45 OK Street where it overlooks the Copper Queen Hotel in the district of Old Bisbee. The hotel boasts a lengthy past as a lodging for miners and that past has given the place enough time to build a reputation of hauntings.

This part of southern Arizona was part of the 1853 Gadsden Purchase. The current Hotel Bisbee sits on Lots 11 and 12 of Block One, land which was deeded to the City of Bisbee by the United States Government in 1904. A year later, J.P. Hill bought the land. On the site, he built two wooden buildings which served as furnished lodgings for miners. A 1915 fire destroyed these buildings and, in 1916, the land was sold to Mrs. S.P. Bedford who constructed and furnished the Hotel LaMore, a twenty-four room brick lodging, over the foundations of the previous buildings.

On October 1, 1917, Mrs. Bedford leased the hotel to Mrs. Kate LaMore for $160 a month. Mrs. LaMore leased the rooms for $2 per day or $8 per week, billing her lodgings as “the most modern in Bisbee.” In the early 1920’s, Mrs. LaMore’s lease expired and Mrs. Bedford ran the hotel, using the LaMore name, until 1925 when the hotel exchanged hands. In 1936 it was sold again to Grace V. Waters, who changed the hotel name to the Waters Hotel. The name change was the beginning of a series of changes made to the hotel.

The building was converted into two-room apartments in the 1940’s. In the 1960’s, it served as a volunteer training center for the Peace Corps. Period carpeting, antique furniture and early photos of the area were added to the hotel during a 1966 renovation. The final change to the hotel was in 1982, when it underwent Certified Historic Restoration. It emerged from restoration as the Bisbee Inn. Owners Al and Elissa Strati sold the hotel in 2003 to Moses and Brena Mercer. 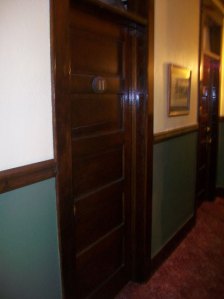 The door to Room 11 at the Bisbee Inn/Hotel LaMore.

The current Bisbee Inn is a charming establishment with cozy rooms and antique furniture. It offers continental breakfast and a great view of Old Bisbee. From time to time, it also affords guests a glimpse into the paranormal.

Room 11 has a non-corporeal guest who is fixated with the water closet. This ghost guest is known for rummaging through toiletries, tossing them about and even opening things like toothpaste to check the contents. Occasionally, the ghost will also slam the bathroom door shut. (I guess, when you gotta go, you gotta go!)

The middle European room, Room 15, is the home of a rather exhausted spirit. This ghost is known for climbing into bed with guests. Startled by their unknown visitor, guests climb out of bed to see if they can ascertain what woke them. While no one has ever actually seen this ghost, some guests have seen the indentation of a body on the mattress. Could this be the ghost of a miner who, after a hard day of work, just wants to rest? 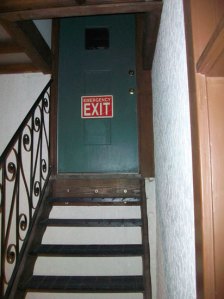 This second floor staircase leads to the back alley outside the Bisbee Inn/Hotel LaMore. Guests have reported seeing the ghost of a handsome miner on these stairs.

Since the hotel did serve as lodging in a mining boom town, it’s not surprising to think that many of the men who worked in the mines stayed in this establishment. It’s even logical to assume that some of those very same miners might be the source of some of the unexplainable events that happen in the hotel.

While the ghosts in Room 11 and Room 15 have never actually been seen, there is one specter who has been seen on the second floor steps that lead to the alley behind the Bisbee Inn. Those who see this fellow on the second floor stairs always describe him the same– He’s a handsome devil who wears his hair long and sports a vest and jeans, which he tucks into his boots. He has never been seen anywhere else but on these stairs, and his connection to the building (aside from the theory that he is a miner) is unknown.

Less frequently seen is the ghost of a miner who has been spotted outside the Bisbee Inn. This ghost wears mining attire of coveralls and boots. He carries a pick axe or a shovel over one shoulder as he begins the arduous climb down the steps beside the Bisbee Inn to make his way “home” from his daily work in the mines. His ghost isn’t the only ghost to haunt the outside of the Bisbee Inn.

At the top of that same staircase, the sidewalk branches in two directions. One goes up to the right. The other path takes you to the left, behind the Bisbee Inn– this is where the hotel’s second floor staircase exits the building. The alley behind the inn is narrow and poorly lit at night. Bisbee Inn’s most active ghost has been seen in the alley, where she saved the lives of three young boys.

Renee Gardner’s book “Southern Arizona’s Most Haunted” describes the heroic actions of this ghost as follows:

… The three boys got out of a movie show at the Lyric Theater and were running home because it was raining when the show let out. They ran up OK Street, up the steps next to the Bisbee Inn, and turned left, down the back alleyway. When they turned the corner, the Lady in White walked through the back door and outstretched her arm. She put her hand out in the STOP position. The boys got so frightened they turned around and started to run back down the steps. At that moment a rockslide occurred from the hill above. The boys believe that the Lady in White saved their lives that day. Repairs made to the wall after the rockslide can still be seen to this day. 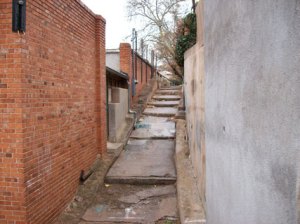 The alley behind the Bisbee Inn/Hotel LaMore where a ghostly lady in white scared away three young boys just before a rock slide collapsed the alley.

The Lady in White has long and flowing white hair, and is described as wearing a white gown. The smell of lilacs has been linked to the presence of this ghost. Those who have seen this apparition describe her as angelic and watchful. Her heroic actions saving the boys demonstrate her protective nature as benevolent matron of the Bisbee Inn. This innocuous ghost is most active in Room 7 and Room 12, though she has been seen and felt in other areas throughout the hotel.

Owners of the Bisbee Inn also owned the property next door, which used to function as a saloon. There was a stray calico cat in the area and, during the winter, the cat would try to sneak into the warm hotel. The owner would catch the cat and shoo it outside. Though its presence was unwelcome inside the hotel, the owner was indifferent about the cat hanging around the saloon. Tragically, the cat managed to find its way into the saloon’s storage room. Locked inside the storage without food or water and without knowledge of the owner, the sneaky animal passed away from starvation. 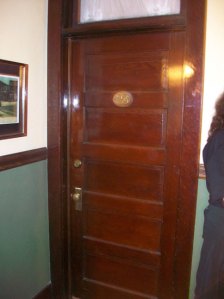 Door to Room 23 at the Bisbee Inn/Hotel LaMore.

In the wake of the feline’s untimely demise, stories about a mysterious cat in Room 23 began to emerge. Hotel patrons started reporting the presence of a ghost cat who would climb onto the bed and curl up at the foot of the bed, some guests even claimed to feel the cat purring contentedly. Perceptive children staying in the room have tried to point out a beautiful calico cat to their parents, who see nothing. Other guests have reported hearing cat footsteps. Curious patrons trying to locate the cat always come up empty-handed. There have even been reports of a cat scratching at the window. The ghost cat has also been seen in various places downstairs, but those sightings are infrequent as it seems to prefer Room 23.

The Bisbee Inn is a charming hotel. It’s centrally located in Old Bisbee, which affords guests the luxury of being within walking distance of the many amenities which Old Bisbee has to offer. While the hotel is reputedly haunted, the ghosts which frequent this establishment are all friendly. While not every guest experiences something strange during their stay, many find the hotel to be a cozy place to spend the night.