Today, May 19th, marks the anniversary of the execution of famed historical figure Anne Boleyn. Anne, the second wife to King Henry VIII of England, was taken from her quarters in the Tower of London and presented for execution at the scaffold site where her head was summarily separated from her body with the swift swing of a sword. Though she has been dead for nearly half a century, some say Anne Boleyn is not about to go quietly into that good night…

Already married to Catherine of Aragon, King Henry VIII first looked upon Anne Boleyn in 1523. Anne was then serving in the household of the queen. Henry VIII was smitten with Anne who was the polar opposite of your average 16th century lady. She was extroverted, charismatic, confident and witty. She also had large, dark eyes which were used with great effect upon those who would set their gaze in her direction.

Anne’s beauty was different from other women of the period who were considered beautiful. Her thick, dark brown hair and dark brown eyes in conjunction with her olive skin made her beauty exotic in a realm where fairer characteristics in skin tone, hair and eyes were usually what was considered beautiful. However, in contrast, history books also ungraciously describe several ‘beauty marks’ which she possessed as moles and goiters. Even more bizarre are the speculations that Anne Boleyn had six fingers on one hand. (Though this last bit has never been conclusively proven…) But, whatever her looks, Henry VIII still took an interest in Anne Boleyn.

Catherine of Aragon was beyond her child bearing years and Henry’s appetite for a male heir to his throne was voracious. Following an affair with Anne’s older sister, Mary Boleyn, Henry turned his attentions towards the younger Anne. In early 1526, Henry was so enamored with this dark beauty that he was begging for her to become his mistress. He showered her with letters and gifts to coax her into his bedchambers. The love letters he sent were full of romantic sentiments.

In one letter, Henry promises Anne “if you… give yourself up, heart, body and soul to me… I will take you for my only mistress, rejecting from thought and affection all others save yourself, to serve only you.” The king, accustomed to easy conquests, was surprised at Anne’s rejection: “Your wife I cannot be, both in respect of mine own unworthiness, and also because you have a queen already. Your mistress I will not be.” Anne made her point: it was to be marriage or nothing.

Source of the above text: http://www.pbs.org/wnet/sixwives/meet/ab_handbook_why.html
(Seventeen of these letters remain in the Vatican.)

Henry VIII set out to divorce his first wife. With her connections and power, this task took several years. Finally, it was done. Henry and Anne were married in secret on January 25, 1533. A lavish coronation ceremony for Anne followed on June 1, 1533 at Westminster Abbey. Though, the London commoners, who still believed Catherine of Aragon to be their true queen, were not amused. During the whole procession they mocked Anne with cries of “HA! HA!” (The initials of the king and new queen).

By the time they were married, Anne was already three months pregnant. Her first child, a girl, would eventually go on to become one of England’s greatest sovereigns– Queen Elizabeth I. But, Henry VIII still desired a male heir. Anne Boleyn gave birth twice more — in 1534 and 1536– to stillborn children, one of which was male.

Henry’s affections for Anne had quickly waned. In 1534 he’d already had his first affair with one lady-in-waiting. Other adulterous relationships would soon follow as Henry set his sights on Anne’s maids-of-honor– Madge Shelton and Jane Seymour. As Henry’s feelings for Jane intensified, he once again longed for divorce.

Tower of London as viewed from the Thames River.

A plan was concocted through which Queen Anne would be removed from her throne. On April 24, 1536, a secret commission was signed by the king giving orders to investigate treason throughout the country. Anne’s actions became the subject of much scrutiny. Eventually, her courtly flirtations, then acceptable for a woman of rank in the 16th century, were soon interpreted as instances adultery and eventually her flirtations and her fiery temper were distorted and submitted as evidence of a conspiracy to murder the king. This act of treason, as it was described in court, was punishable by death.

Anne Boleyn’s death and the first public execution of an English queen, postponed only once to allow an executioner who would use a sword (in lieu of an axe) time to travel to London, took place at eight o’clock on the morning of May 19, 1536 at the scaffold site outside Tower Green at the Tower of London. Prior to her execution, Anne would address her former subjects with an eloquent and dignified speech:

Good Christian people, I am come hither to die, for according to the law, and by the law I am judged to die, and therefore I will speak nothing against it. I am come hither to accuse no man, nor to speak anything of that, whereof I am accused and condemned to die, but I pray God save the king and send him long to reign over you, for a gentler nor a more merciful prince was there never: and to me he was ever a good, a gentle and sovereign lord. And if any person will meddle of my cause, I require them to judge the best. And thus I take my leave of the world and of you all, and I heartily desire you all to pray for me. O Lord have mercy on me, to God I commend my soul.

Source of the above text: http://www.pbs.org/wnet/sixwives/inherwords/ab_words2.html 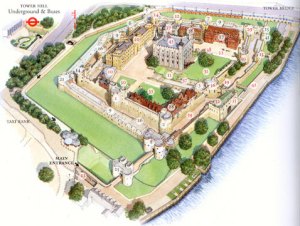 Unfortunately, it would seem as though Anne Boleyn has not taken leave of this world– her ethereal presence is still felt (and sometimes seen) in the Tower of London. In 1864, a palace guard claimed to have seen a headless apparition which he charged with his bayonet. The startled guard, having passed clean through the specter, then fainted. This encounter nearly got the man court-martialed. One captain of the guard also claimed to have seen the headless ghost of Anne Boleyn amid a procession of other ghosts in the chapel of the White Tower. She has also been seen on the grounds of Blickling Hall, headless and riding about in a carriage.

One thought on “Murderous May: The Headless Ghost of Anne Boleyn”