Palace Guards begin the changing of the guard at St. James Palace.

The screams for help rang out in the early morning hours of May 31st, 1810. It was 2:30 A.M. and the Duke of Cumberland, Ernest Augustus, brother to George IV and William IV was attacked as he slept. The sharp blade of the assailant slashed and hacked through the Duke’s padded nightgown waking him from blissful slumber. The Duke deflected many of the blows with his hands and wrists as he fought off his attacker while crying for help. Cornelius Neale, a valet to the Duke, responded to his pleas for help. By the time he arrived, the assailant had fled leaving the Duke’s bloodstained saber lying on the floor by the door.

The location of the attack on the Duke of Cumberland was St. James Palace. The bulk of St. James Palace was built between 1531 and 1536. The red-brick structure was commissioned to be built by Henry VIII on the site of the Hospital of St. James, Westminster. Several portions of the old structure still remain including the Chapel Royal and the great Tudor gatehouse on St. James Street which still bears Henry VIII’s royal cypher. The State rooms were restored in 1813, following an 1809 fire which destroyed the east and south ranges of the Palace. 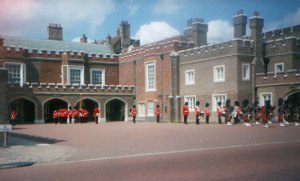 Palace Guards begin the changing of the guard at St. James Palace.

St. James Palace also has a rich history that compliments the stately building. Henry Fitzroy– the surname prefix of “Fitz” oft denoted illegitimate offspring of Royals– illegitimate son of Henry VIII is known to have stayed at the palace until his death by “consumption” in 1536. Anne Boleyn, second wife to King Henry VIII, stayed in the palace the evening following her coronation. In 1558, within the walls of St. James Palace, Mary Tudor signed the treaty to surrender Calais, a portion of France then controlled by England. St. James Palace was where Elizabeth I was staying when the Spanish Armada threatened England. In 1840, in the Chapel Royal, Queen Victoria was married to Prince Albert. St. James Palace was also the birthplace of Charles II and James II and a frequent home to all monarchs from 1698 until William IV. Today, St. James Palace is the home to the Prince of Wales. In 1810, St. James Palace was location to a brutal attempted murder and what was deemed a suicide.

Ernest Augustus, Duke of Cumberland and Uncle to Queen Victoria had the reputation for being one of the most hated and feared men in England. He was a very shrewd man. He was also licentious, unscrupulous, duplicitous and autocratic. Augustus did eventually marry a woman with an equally heinous reputation– widow Princess Frederica of Solms-Braunfels. Though the Duke’s claim to fame wasn’t being the 5th son of George III, but rather his military prowess.

The Duke was tall and lean and sported a militaristic beard and mustache, likely to hide his unsightly battle scars which he received in May 1794 during the First Battle of Tournay when he was seriously wounded by a blow to his head which resulted in him losing one of his eyes. Subsequently, portraits of the Duke tend to show him in profile.

Military Musicians leave St. James Palace as they march to Buckingham Palace for the changing of the guard.

Following the vicious May 31st attack the Duke of Cumberland summoned both a doctor and his other valet, Joseph Sellis. Two men were dispatched to fetch Sellis from his chambers. When they arrived, they found something much more gruesome than the plight that had awaited the Duke. As they approached Sellis’ chambers, the two men heard a gurgling sound from within. They rushed to the door and, finding it open, burst into the room. Sellis lay atop his bed, dying in a gurgling pool of his own blood, his throat had been cut so deeply his spine had stopped the blade.

There were no Crime Scene Investigators to come and inspect the body for evidence of foul play. Rather, as was customary of the time, an inquest was held to determine the cause and method of death. This inquest was rapidly put together and they hastily reached a convenient verdict of attempted murder of the Duke of Cumberland– the motive for which Sellis had tried to conceal by ending his own life. Because the Duke freely expressed a hatred for Catholics, it was thought that could have been Sellis’ motive.

It is likely that modern forensics would have balked at the attempted-murder-suicide verdict– especially when considering the plentiful court gossip. One of the most disturbing facets of the gossip is the popular theory of a cover-up. Rumors that Sellis’ hands were clean and there was bloodstained water in the valet’s washbasin suggested either the Duke had played a different role in the attack– that he had killed Sellis for reasons of his own and then covered it up by faking the attack on himself. (Were those rumors true, they also suggested the possible and oft overlooked involvement of a third party.)

Guards leave St. James Palace as they march to Buckingham Palace for the changing of the guard.

The motive for the attack and the “suicide” changes, but the most predominant theory is that the Duke of Cumberland murdered Sellis to silence the valet who was thought to have been on the verge of exposing an illicit and adulterous affair which the Duke was allegedly having with Sellis’ daughter. According to rumor, the daughter, then pregnant, had committed suicide and an infuriated Sellis went to confront his employer who then silenced him with a blade to avoid scandal. Popular theories aside, the Duke’s involvement in Sellis’ murder was never conclusively proven.

Unfortunately Joseph Sellis has been known to wander the halls of St. James Palace and also to repeat his death throes. His ghost is accompanied by the metallic scent of fresh blood and is often portrayed as a shadowy figure wandering about the palace. Palace staff have had items relocate of their own volition. They’ve also felt uneasy– as if they were being watched. In the chambers where Sellis expired, staff and visitors alike claim to have felt chilly in various places in this particular room. They’ve also reported feeling as if they were being watched. But, the most unsettling vision some unfortunate souls claim to have seen is the ghost of Joseph Sellis propped up in bed with his mouth open over a lolling head, which has nearly been severed from his body.

If you’re a member of the general public, chances are you won’t get invited for tea at St. James Palace– but if you are in England, you can catch a glimpse of the palace prior to the changing of the guard at Buckingham Palace, since the guard change begins at St. James and the soldiers stationed there will eventually meet at Buckingham for the full changing of the guard. While you’re there, you might see if you can catch a glimpse of Joseph Sellis’ ghost.