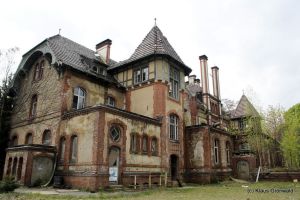 Walking through the winding structures and empty streets of the Beelitz-Helstatten Sanitorium within the Potsdam-Mittelmark district of Brandenburg Germany, one can barely imagine  life existing at all here.  With the exception of a neurological centre and as well as a section devoted to research and care of patients suffering from Parkinson’s Disease, a majority of the 60 building complex has been abandoned completely since 2000.  Construction of the building began in 1898, and at one time its halls and rooms were filled with patients, doctors, nurses, orderlies, as well as a host of other professions designed to treat and cure consumptive illnesses, particularly tuberculosis.  It did not remain exclusive to this type of treatment for long.

In the event of World War I, the hospital became a military medical facility, treating members of the German Imperial Army.  One young soldier in particular was treated there for a wounded leg, one who would go on to lead the Second World War–Adolf Hitler.  The hospital was also used to treat military personell during WWII.  When the Soviets occupied the area in 1945, it became a Soviet military hospital until 1995.  At that time, an attempt was made to keep the complex together as a hospital, but with the exception of the small sections mentioned earlier,  Beelitz-Helstatten was left to decay and become one with the surrounding forest.

Much of the inspiration to build a hospital complex for patients with lung disease came when in 1882, Robert Koch discovered a name for what had been ailing many people across Germany as well as other parts of the world.  Tubercle bacillus, more commonly known as tuberculosis, is an infectious disease usually affecting the lungs, that can be spread through contact with those infected.  Most people exposed are asymptomatic, however one in ten latent cases end up being full-blown infections.  At one time, it could be considered a death sentence, especially for the poor who could not afford the care.

When the hospital began construction in 1898, it was designed not only for treatment of tuberculosis, but other non-communicable diseases as well.  When all was completed, there were 60 buildings, all designed to serve patients and staff alike.  There was special attention paid to keeping the sexes separated, so the women were housed in the West wing of the complex while men were place in the East wing.  Until 1930, it was primarily a tuberculosis hospital, with its brief stint as a military hospital during World War I.  However, when the Third Reich assumed control in 1933, it once again became a hospital to treat the military.  It would never primarily serve tuberculosis patients again after this time.  Once the Soviets occupied the hospital, it remained in military service until its demise in 1995.

To look at the place today it would seem that the agony of war-time injuries have embedded themselves in the very structures that remain crumbling and derelict.  It doesn’t seem like the sunny, open atmosphere it must have been all those many years ago.  Tuberculosis patients required much open air and sunshine to recuperate and this was taken into consideration for the design of the buildings.  However, to walk its winding paths now, the feeling is very ominous and foreboding.

Since the area is not patrolled often, many late night parties and curiosity seekers end up within its confines, often coming out with tales of supernatural experiences.  It must be noted that abandoned structures are filled with potentially toxic materials such as mold and friable asbestos, so it is not encouraged to actually enter these   The pictures that have been taken by those who have dared walk within tell a story of a once magnificent complex sadly retreating back to the nature that surrounds it.

For more reading and pictures of this fascinating place, please follow these links