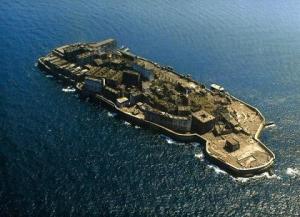 Imagine living on an island that’s a mere 15 acres of land. Sounds like a lot of room, right? Considering that 15 acres is .02 square miles and at it’s peak, there were 5,259* individuals living within this 15 acre compound, it’s quite cramped. Highrise apartments reached high into the sky, pressed tightly together, providing housing to those who were forced to live and work on this island that was once considered the most densely populated area on earth.

This island, one of over 500 uninhabited islands in the Prefecture of Nagasaki, was once home to a vast coal mine owned by Mitsubishi Corporation. In the late 1800s, the rich coal deposits beneath the ocean floor were tapped and the island’s heyday began.

For nearly 100 years, Chinese and Koreans – forcibly recruited by the Japanese – lived and worked on the tiny cramped island. As many as 122 of the 500 South Koreans forced to work on the island died as a result of working in the coal mines.

After World War II, the island saw an improvement in life with modern luxuries provided. Televisions, radios and a movie theatre opened to the people on the island and rooftop landscape sprang up everywhere, maintained by the island’s employee-residents.

By 1974, however, coal was on the decline as the prefered source of energy changed to petroleum. In April of that year, all of the residents were gone from the island and the mine was permanently closed.

Anyone visiting the island would find many relics of the period when the island was inhabited. An x-ray machine still sitting in a doctor’s office, poised to take images of a patient’s body. Children’s toys can be found in empty apartments. Old TVs and ovens still wait to be used. All serving as a ghostly reminder of the island’s past.

Despite suffering three decades of neglect – a fact which made it a prime target for the first episode of the History Channel’s Life After People – the buildings stand in reasonably good shape. So much so that Japan has applied for the island to be a World Heritage Site. Considering the number of South Koreans who were forcibly recruited to work on the island, there is a lot of opposition to Japan’s application.

* Two of the sites I got information from regarding this site give this number as the number of people living/working on the island. Two other sites which speak of it indicate there were more than 13,000 employee-residents.

Update!!! For any James Bond fans, in the latest movie, Skyfall, this is the island to which 007 is taken via boat to meet Silva for the first time and where Silva is subsequently captured by MI6.