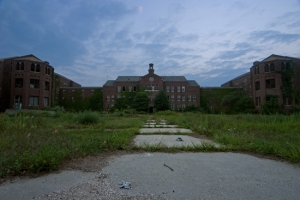 If you live on Long Island, eventually you will pass the Pilgrim State Hospital site and wonder what the heck this huge building is. There’s really no escaping it.  Opened October 1, 1931 (we just missed its 80th Anniversary), it was at one time listed in the Guinness Book of records as the largest mental institution in the world. At its highest capacity, just after World War II, Pilgrim State housed over fourteen thousand patients. The massive property had its own Long Island Railroad station,  post office (with its own postmark), power plant, agriculture and livestock farms, cemetery, police and fire stations and water tower. The complex was made up of many different buildings on over a thousand acres.

During World War II, the government took over four hospital buildings in the complex to create Mason General Hospital, to serve as a psychiatric facility for soldiers traumatized by the horrors of war.

Pilgrim State was considered to be on the cutting edge of psychiatric medicine…no morbid pun intended. Lobotomies were common practice in the facility, with over two thousand taking place in the hospital in the 40’s-50’s.  An estimated 1 out of every 25 lobotomies that took place in the United States during that time period, took place within the confines of Pilgrim State. Electro-Colvulsive Therapy was also practiced on the victi….patients in the facility. An unrecorded amount of the patients suffered severe, irreversible damage from these treatments that practically left their minds the equivalent of hollow shells.

Thankfully, over the years the treatment for psychiatric issues have evolved.  Lobotomies were outlawed in the 1960’s and shock therapy (though still used) has been drastically altered for the benefit of the patients. Starting in the 1950’s, doctors turned more and more to psychiatric drugs to help even out the unbalanced chemicals in the brains of their mental health patients. With the advent of these drugs came blessed freedom for many of the inmates of psych hospitals such as Pilgrim State.  For the first time in years, many of these patients could actually experience life outside the boundaries of the hospital, returning only for outpatient treatment.

This was wonderful news for the patients and very satisfying to the people who dedicated their lives to providing care for them, but obviously once the patient population declined, the hospital started closing the buildings one by one.  Currently there is a 500+ bed, modern, state of the art psychiatric hospital still operated on the site, but most of the buildings that speckle the property are now merely cavernous, peeling husks.

Though many “urban explorers” long to traipse through the abandoned halls, a word or two of caution is warranted.  There is a nearby highway patrol station that keeps a sharp eye for trespassers and many of the buildings have been purchased by a developer with a mind to transform the property to a bustling residential and entertainment complex.

I did a fair amount of research to see if I could find any references to ghosts that may have stuck around the hospital.  After all, if any place deserves to be haunted, it’s an abandoned psychiatric hospital.  However, it seems that most of the patients have moved onto a better place, as I did not find any tales I deemed credible. But honestly, just looking at the crumbling buildings would be creepy enough for most people.

There is a barrage of wonderful sites on the web with current photos of the old Pilgrim State buildings and many personal accounts by former staff and patients who speak very fondly of the place.  I would recommend at least the following two sites for further reading and picture-viewing, if you are interested: