Although the Kirkbride Plan for mental institutions was popular during the turn of the last century, there was one major flaw in its design: it lacked the proper facilities for noisy and violent patients. The solution to this problem was called simply the Cottage Plan. Using this plan for hospitals allowed patients to be separated more efficiently and those who were noisy or violent could be kept from those who were neither. 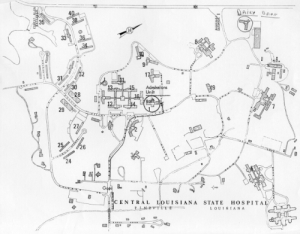 As you can see, the Central Louisiana State Hospital layout closely resembles a college campus, where buildings are spread out so that the difficult patients could be dealt with separately from the general population. And, indeed, that’s what it felt like. From 1990 to 1995 I lived just one mile from this hospital, during my college years. We never thought anything of it, often using the grounds of the hospital as a quick route to the northern end of Alexandria. We used it day and night and had no fear of driving through what we knew to be the grounds of a state mental hospital, though there was a dirt road behind some of the staff housing that a friend loved to drive along at night with his headlights off in an effort to scare passengers. I never remember seeing anyone around whenever I rode through the area and often forgot that it was a still functioning hospital until I saw cars parked near buildings. Of course this could be largely due to the fact that the public access road that we used is basically on the outskirts of the property.

I never heard about any hauntings at the hospital while I was in college, but then again I wasn’t really into the paranormal during my college years. At least not to the extent I am today. It wasn’t until I purchased and read through Weird Lousiana that I learned of potential hauntings on the grounds of the hospital. With a cemetery that has over 2,000 graves, and the methodology for treatment used in many cases, it’s not difficult to imagine the area being haunted.