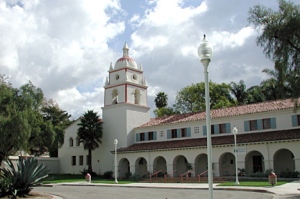 Imagine yourself as an 18 or 19 year old, fresh from high school, heading into college. The college of your choice sits on a picturesque area of land, most buildings are original 1930s Spanish mission-style architecture. Not only is the campus itself beautiful, but you’re in sunny California, just miles from Los Angeles and Hollywood. What could be better, right?

Well, if you’re a current student enrolled at California State University, Channel Islands, I imagine nothing could be better… unless you’re one of the students who’s experienced the former residents of CSUCI. It’s been only 14 years since the campus of CSUCI hosted residents of a different sort. Prior to 1997, the campus functioned as the Camarillo State Mental Hospital. It opened its doors as a branch of the California State University system in 2002.

In 1932, the state of California purchased 1,760 acres of the Lewis Ranch – originally Rancho Guadalasca, a Mexican land grant of 1836 – and established the Camarillo State Mental Hospital, three miles outside of the city of Camarillo. The hospital was in use from 1936 to 1997 and in the 50s and 60s, it was at the forefront of treating illnesses that were previously thought to be incurable, including a drug for people suffering from schizophrenia.

Though initially small in size, having only male patients for the first year of its existence, the hospital quickly grew in size, requiring additional buildings and eventually even housing for the hospital staff so they could be close at hand 24/7. The hospital became a self-contained unit, providing its own food – through patient vocational therapy farming – as well as adding other various buildings to become a virtual town.

In the 1940s, children became patients of the hospital and a whole new area was added to the hospital to keep the children separated from the adults. Adolescents were also separated from the children, in their own building, and eventually a high school was added to the property. Imagine, then, spending your whole life in a place like this, because even in the 50s and 60s, there was a stigma to having any sort of mental imbalance.

As previously mentioned, the 1950s and 60s saw new growth in medications available for patients with various illnesses and Camarillo was at the forefront of development and use of these drugs. Phenothiazines such as Ritalin, Thorazine and Stelazine came into popular use during these decades, but there were undesirable side effects of taking these drugs and consistent over-medication as well. There were darker measures taken in the name of curing these sick individuals, too. For many years, lobotomies were performed as a means to cure problems as was Electroconvulsive therapy, both of which often left individuals damaged beyond repair.

The most fundamental change at CamarilloStateHospital occurred in 1967 when the hospital began to house patients with developmental disabilities. The main north complex was chosen to house the ‘DD’ population. Patients suffering from mental retardation, autism, organic brain disorders, and other disabilities comprised this group. Some were profoundly affected by their disorders and were very low functioning. They would require constant supervision and assistance to perform even simple activities of daily living. Many others were high functioning and were able to lead relatively happy lives at the hospital. Educational programs were created for these high functioning patients including a variety of vocational programs. There were workshops in the north complex where they would learn arts and crafts as well as other skills which helped prepare them for entry into the outside world. Some of the items the DD patients produced in the workshops became popular in the communities beyond the hospital grounds. In particular their wind chimes as well as small ‘pebble people’ (collections of stones with painted faces) were in steady demand. Of major importance to all patients and staff on the DD side were the Special Olympics activities. The Special Olympics programs gave to all a sense of enjoyment, accomplishment, and pride. [2]

The 70s saw a reduction in the performance of lobotomies and use of Electroconvulsive therapy and the addition of a recovery program for alcoholics and those with chemical dependancies. Through the 80s and into the early part of the 90s, there was a decline in the number of patients at the hospital, which brought about its eventual closure.

Today, even though it’s now a university, students have claimed to experience paranormal phenomena, which is understandable considering that there were a number of deaths which took place on the grounds of the hospital. Children’s voices can be heard around the children’s centre, near the bell tower an old woman is often seen asking for directions to the chapel and another old woman is often seen wandering the halls.

The hospital has gained notoriety in other ways as well. It’s been used as a filming location on numerous occasions for both television and film as well as being the subject of many songs. Jazz musician Charlie Parker wrote “Relaxin’ at Camarillo” after going through detox at the hospital. Punk group Fear wrote a song called “Camarillo” about the hospital, as did Frank Zappa with “Camarillo Brillo”. The most famous of all, however, is one denied by the artists. Although the members of the 70s group The Eagles deny it, the lyrics of their hit song “Hotel California” appear to speak of staying at a metal institution and Camarillo State Mental Hospital was the most famous of the time. While the Eagles themselves claim the song is about the hedonism rampant in Hollywood at the time of their existence, it can also be interpreted as a song about someone in rehab. The ‘colitas’ referred to in the second line of the song is Mexican slang for the buds of a Cannabis plant which is often smoked.