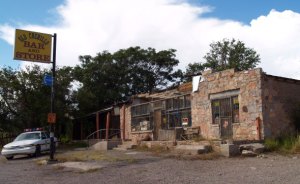 Ghost towns in the southwestern United States are a dime a dozen. They also provide a snapshot of westward expansionism during the days of mining boom towns. Many of those towns ceased to thrive because of lack of potable water. For others, the resources being mined dried up and people just left town. Cuchillo, New Mexico was not a mining town. It was a stop-over point for a stage line.

Cuchillo (Pronounced Coo-Chee-Yo), New Mexico is located approximately 16 miles northwest of the town of Truth or Consequences, and it is named after a Warm Springs Apache chief, Cuchillo Negro (meaning Black Knife), who wandered the area prior to any development. Around 1850, the first buildings were built and the town was established. As nearby mining operations opened the stage line needed a stop-over point. In 1886, the Armstrong Brothers of Chloride, New Mexico made Cuchillo a stop-over point for their stage line. The little town expanded– the bar becoming a popular destination for cowboys, miners and other folk just passing through.

The dust may have settled on the roads into town, but Cuchillo still has whispers of an active past…

With a past tied to the mining industry, Cuchillo flourished so long as local mining industry thrived. By 1883, the town had an established post office which formed the center of town along with the Old Cuchillo Bar, mercantile, and a lodging area. These buildings are wood frame and adobe buildings, which were later improved upon.

Owner of the Cuchillo Bar and Store, Josh Bond, says he would “absolutely not” spend any of the night inside the building. “I have so many unexplainable things happen that I have to believe it’s haunted.”

What are some of those unexplained events? According to the owner: “A male’s voice has been heard in [the bar] room several times, and I believe it to be an old cowboy that’s sort of taken over this room,” Bond said. “I’ve heard voices. I’ve heard things fall. I’ve heard a lot of whistling from the bar area.” In conjunction with the cowboy’s voice, Bond has heard rattling doorknobs, someone lighting a wood burning stove, and pots and pans banging as if someone were cooking a meal. The owner has also seen shadowy figures walking throughout the building, and he has also seen securely latched cabinets mysteriously open.

With the number of old 1880’s relics which were abandoned in the town and the look and feel of the town remaining somewhat unchanged, it’s not a big leap to assume that the spirits of those whose remains have returned to the earth have returned in the after life to once again take up residence in a town they loved.

Please note that the Cuchillo Bar and Store is closed to the public, except by appointment.