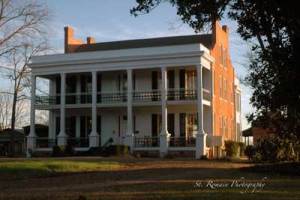 Set in the farmlands of Central Louisiana, sits a modest two and a half-storey house built by William Lloyd of the Lloyd’s of London insurance dynasty. It is surrounded today by 640 acres of working farm land, though the plantation is a bed and breakfast inn.

William’s appearance in the United States was the act of punishment when he embarrassed the Lloyd family. They gave him enough money to start a new life, forbade him from ever return to England and forbade him from using the second ‘L’ in his surname. (Let me inject here that I am quite curious to know exactly what he did to embarrass the family, but as of the writing of this post, I haven’t been able to discover.) It is unclear how William ended up in Central Louisiana, but there is evidence that he and a brother, James, lived in Tennessee for a while.  In 1820 he purchased a piece of land in Cheyneyville and built a two and a half-storey Classic Revival  style plantation home with  Georgian influences.  Sixty slaves worked the plantation whose crops consisted of Tobacco, indigo, cotton and sugarcane. William poked his nose into the affairs of the local Indian tribes and found his plantation under attack more often than not.

When the Civil War rolled around, William decided to play both sides in an effort to protect himself and his plantation. He spied for both Confederate and Union forces, but was ultimately caught by the Union soldiers and hung for his crime of counterespionage right in front of his own house. His ghost is believed to roam the plantation these days with numerous activities being attributed to him: doors opening, audible footsteps, the piano being played and kitchen cabinet doors being opened and closed. He also occasionally breathes on or touches guests staying at the bed & breakfast.

After William’s death, his brother James took over the plantation. James retained ownership until 1871 when he sold it and thereby started a trend of the plantation going through 21 different owners. None could ever make a profit owning the plantation.

Another ghost said to haunt the home is that of William’s neice Inez. Poor Inez Loyd was set to marry at the plantation, but was stood up at the altar. She fled the wedding scene, ran up to her room and jumped to her death.  Her ghost now roams the home, but there are no specifics of her hauntings, as there are with William’s.

Three other ghosts seem to be wandering this plane of existence. First is Ann(e) Loyd who calls out to current staff members. There is no evidence of who she was; wife to William or James or daughter to James. Next is a slave/nanny called  Sally Boston who was intentionally poisoned. She seems to have an aversion to candles and when any are present in the rear parlor, they are discovered knocked down. The last ghost is another that there’s much information on. During the Union occupation of the plantation, a woman belonging to the Loyd household fell in love with one Harry Henry. When the Union forces moved out of the house, Henry wasn’t inclined to go with them and hid in the attic until the coast was clear. When his food and water ran out, he descended from the attic and promptly ran into the matriarch of the house who had no idea Henry had stayed behind for love. She shot him immediately and he was buried under the house. It’s said his violin playing can often be heard in the attic.

I visited Loyd Hall Plantation once when I was in college. At the time, they were selling copies of an old map of Louisiana which detailed every plantation in the state along the Mississippi River. My mom and I went during one of her visits and it’s quite a lovely little house, if a bit pretentious for its location.