Literally down the street from the more prolific Myrtles Plantation in St. Francisville, Louisiana is where you’ll find the pulchritudinous plantation and vast gardens of Rosedown. An inviting alley of live oaks and enchanting gardens showcase the lovely neoclassical Doric columned facade constructed by Wendall Wright from cypress and cedar trees directly from the lands surrounding the plantation. It’s no wonder the picturesque plantation has captured the heart of at least one old resident who refuses to leave. 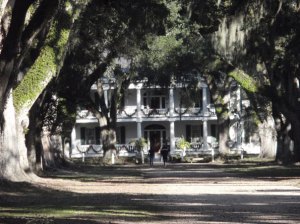 The house was first commissioned by Daniel and Martha Turnbull in 1834– though it wasn’t the only plantation with ties to the Turnbulls. (Daniel Turnbull also operated Styopa, Catalpa, Middleplace, Hazelwood, Grove, Inheritance, Woodlawn and De Soto.) Construction on Rosedown plantation was completed in May 1835. They named the house Rose Down, which would later become Rosedown, after a play the Turnbulls had seen in Europe while on their honeymoon. The honeymoon in Europe would also influence Martha Turbull’s passion for gardening and she took great effort to replicate the formal gardens she’d seen in France and Italy. So great was her passion for gardening, she even kept a detailed journal of her affairs as she expanded her gardens to encompass an area that would total approximately 28 acres of privately maintained formal gardens.

The Turnbulls had three children– William B., Sarah, and James Daniel. James, the youngest child, born on August 2, 1836, died in 1843 after contracting yellow fever. Their eldest son, William, was born on August 8, 1829. Sadly, he too died, drowning in the Mississippi River on November 11, 1856 on a trip between Rosedown and De Soto when the steamboat Bella Donna capsized his skiff. William left behind his wife, Caroline Stanwick “Cora” Butler, whom he had only been married to since May 12, 1853. (Cora was the great granddaughter of Martha Washington, which is what ties the Turnbulls to Woodlawn Plantation.) Sara was the luckiest of the children. She lived long enough to inherit Rosedown. The plantation stayed with family until 1956. Eventually, the old cotton plantation was adopted into the Louisiana State Parks system, who have since restored the grounds to their former grandeur. Although the family no longer owns the property, it would seem as if some of them have never left…

Rosedown plantation has its own phantom visitor, who loves to play pranks on staff members. While the ghost has never actually been identified, staff think the ghost is that of young William because of his untimely demise. William’s family had also painted black mourning stripes in the eaves of the south wing. According to Curator Polly Luttrull, William enjoys turning lights on just to let staff know he is there. Luttrull had shut off all the lights prior to locking the house up. When she went back through the house, all the lights had been turned on again. Several other employees have had similar experiences with the lights, sometimes after they’ve locked the house up and set the alarm. The friendly specter also enjoys moving the furniture around, most frequently when all the visitors have left and Rosedown is locked up for the night. Perhaps the ghost of William is redecorating the place and moving things where they were when he lived in the house?

If you’re ever out visiting the Myrtles, take the time to make the short jaunt down the road– even if you don’t see the ghost, the gardens are worth the visit!