The year was 1927, in a decade that history would later dub the Roaring Twenties, but would come crashing down a mere two years later. It seems fitting that America’s greatest pilot – after the Wright Brothers of course – would step into the spotlight in such a period of history. His name is one familiar to any American today: Charles A. Lindbergh. He is most famous for his prize-winning trans-Atlantic flight in May of 1927 from New York City to Paris, France. However, there is another infamous story to which he is linked that fewer people are aware of: the kidnapping and murder of his 20 month old son.

The “Crime of the Century,” as the press of the day referred to it, occurred on the evening of March 1, 1932 when 20 month old Charles Lindbergh, Jr. was discovered missing from the family home outside the tiny hamlet of Hopewell, New Jersey. The kidnapping was discovered by the child’s nurse, Betty Gow, around 10 PM that evening and immediately reported to his parents – Charles and Anne Lindbergh. A search of the room and land immediately surrounding the house yielded only a ransom note discovered on Charles Jr.’s bedroom window sill, demanding a $50,000 ransom. The local police were called and the New Jersey State Police soon took over the case.

Unfortunately no credible evidence was discovered at the house. Police – and for a short time reporters – were allowed to wander freely around the property and there was no real adherence to any procedure we might be familiar with today. The foot prints finally noticed just beneath the bedroom window were indistinguishable and therefore ignored. There were no fingerprints found in the room nor was any blood discovered anywhere – inside or out.

On March 6th, a second ransom note was received by the Lindberghs increasing the ransom amount to $70,000. Police and other officials met to discuss procedure and the Lindbergh’s lawyer, Colonel Henry Breckenridge, hired private investigators to help.

A third ransom note was delivered two days later indicating that whoever had been chosen as mediators between the kidnappers and the Lindberghs was not acceptable. Shortly thereafter, a retired school principal, Dr John F. Condon, took an ad out in the local paper offering to act as a go-between and would add an additional $1,000 to the ransom monies. This the kidnappers apparently found acceptable. Charles Sr. also approved the use of Dr Condon in the role as go between.

The fifth and sixth ransom notes were delivered to “Jafsie” (the code name created for Dr Condon) himself directing him first to a vacant stand near a subway entrance where a new note would give him further instructions. His final destination would be Woodlawn Cemetery where he would meet and ultimately speak to a man simply known as “John”.

A total of twelve ransom notes – some merely directing Jafsie to another location – were received before the child’s body was discovered on May 12, 1932.

…the body of the kidnapped baby was accidentally found, partly buried, and badly decomposed, about four and a half miles southeast of the Lindbergh home, 45 feet from the highway, near Mount Rose, New Jersey, in Mercer County. The discovery was made by William Allen, an assistant on a truck driven by Orville Wilson. The head was crushed, there was a hole in the skull and some of the body members were missing. The body was positively identified and cremated at Trenton, New Jersey, on May 13, 1932. The Coroner’s examination showed that the child had been dead for about two months and that death was caused by a blow on the head. 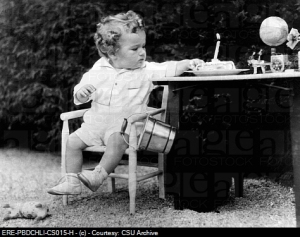 With the determination that the body found was indeed that of Charles Lindbergh Jr, the investigation quickly moved into high gear. Banks and retailers in New Jersey and New York were instructed to keep an eye out for any money encountered with the serial numbers from the ransom money. The New Jersey State Police would head the investigation with support from the Bureau of Investigation (now the FBI) and cooperation on the part of the New York Police. A reward of $25,000 was offered to anyone who could provide the investigation direction. This naturally brought out all sorts of people, interested in the money, but not the truth. A lot of police and BI manpower was wasted following every tidbit of information given, because nothing could be left to speculation. Other people linked to the Lindberghs were also victims of con artists wanting to make a few bucks. Not difficult to believe since the world was in the iron grip of the Great Depression.

Two years after the kidnap and discovery of the infant’s body, investigators were able to zero in on one man: Bruno Richard Hauptmann. The use of various gold certificates known to be part of the ransom monies were reportedly used by Mr Hauptmann and he was summarily arrested. Samples of his handwriting were taken to compare with the writings of the numerous ransom notes. Mr Hauptmann was identified by two individuals as using gold certificates which were part of the ransom money. The first “witness” was a gas station attendant who identified Mr Hauptmann as the individual who paid for gas using a $10 gold certificate. The attendant was suspicious of the use of the gold certificate so he noted the license plate number of the car the man drove. The second “witness” was a young woman working at a Greenwich Village movie house who claimed Hauptmann handed her a folded bill from the ransom money to pay for a movie ticket on his birthday.**

On the morning of September 19, 1934, after a night of surveillance, police arrested Bruno Richard Hauptmann for the crime of kidnapping and murder of Charles Augustus Lindbergh, Jr. Mr Hauptmann was a German immigrant who had been living in the United States for 11 years. He was married with one child, a son. His primary means of employ was as a carpenter, though he had partnered with other immigrants in an illegal fur trade. Despite his claims of innocence, a $20 gold certificate was found on his person at the time of arrest. A search of his home yielded a further $13,000 which had been hidden in various compartments in his garage. Hauptmann claimed that the money was being held for an old business partner who had returned to Germany, ill, and subsequently died there. Money was owed to Hauptmann by this man and when Hauptmann discovered the stash of money, he felt entitled to it.

Hauptmann was indicted in the Supreme Court in Bronx County, New York for the crime of extortion, as that’s where the money was exchanged between Jafsie and “John” and where it was later discovered to be in Hauptmann’s possession. Days later he was indicted for murder in Herndon County, New Jersey. The murder trial for Bruno Richard Hauptmann began on January 3, 1935 and lasted five weeks. The case against him was based solely on circumstantial evidence, yet he was found guilty of murder in the first degree on February 13, 1935. While his defense team appealed, it was to no avail.

** This information is not provided by any of the internet sources relied on for this story, but was learned while reading Noel Behn’s Lindbergh: The Crime