Devils Den, Gettysburg, Pennsylvania (c1909) – Location of intensive fighting on Day 2 (July 2, 1863) of the Battle of Gettysburg in the American Civil War.
Photo Courtesy of the Library of Congress Archives.

I’ve been to the Gettysburg battlefield in Pennsylvania twice (so far) in my lifetime. Once in 1999 with my family and again in 2005 with my old, college roommates at my insistence. Both times, I’ve really enjoyed myself there. The historical significance of the Gettysburg Battlefield alone is really inspiring. And, of course, the ample graveyards and ghost stories really made me feel at home.

You have to spend at least a day in Gettysburg. The battlefield is so extensive it takes a whole day to do a self guided car tour– if you see everything from Iverson’s Pits, the Roundtops, the Devil’s Den, the Triangular Field, and Culp’s Hill (among other places). The visitor centers, cemeteries, and museums are really engaging too. Probably the most notable thing about this battlefield is the documentation of the battle and the National Park’s efforts to restore the battlefield to how it looked those three fateful days in 1863. In the years since I’ve been to Gettysburg, they’ve removed trees where there were none and planted trees and orchards where they once stood. Something about the atmosphere and the terrible amounts of men who met their untimely demise on the field of battle in Gettysburg calls to the dead– though the official park stance on the paranormal is that they have no stance on the paranormal.

One place on the battlefield particularly piqued my interest all those years ago– The Devil’s Den. It was a large outcropping of boulders near the base of Little Round Top. The Devil’s Den was also a location of great casualties on July 2, the second day of the battle. Union soldiers in the 124th New York, 4th Maine, and 99th Pennsylvania regiments were pinned in the massive boulders and the confederates of 1st Texas, 3rd Arkansas, 44th and 48th Alabama, and 2nd, 15th, 17th, and 20th Georgia regiments were up on the facing hill of the Triangular Field and down by Plum Run. The battlefield was quite literally a bloody mess (which is how the area between the Devil’s Den and Little Round Top near Plum Run became known as the Slaughter Pen). By the end of the day, the Union soldiers were driven from the Den, though many of their comrades-at-arms had been picked off by sniper fire as they had fought and lay dead among the boulders.

The location of The Devil’s Den is considered one of the many haunted hot spots on the Gettysburg Battlefield by both paranormal believers and skeptics alike. There have been several reports of malfunctioning cameras (exposed film), watches, and other electronic devices in the area. Sounds of disembodied footsteps, marching, cannon fire, galloping horses, and disembodied cries of soldiers who once lost their lives on this hallowed ground have been heard too many times to count. Apparitions have also been reportedly seen in this area of the battlefield– particularly the ghost of what is assumed to be a Texan soldier who “look[s] sort of like a hippie– long hair, ragged clothes, barefoot, big floppy hat” and also the spirit of a Union soldier who seems, at first, to be a reenactor from the NY regiment who enjoys posing for photos. The union soldier will pose as they did in those days– standing with his back straight, one hand across his lower torso and the other hand placed at his back. The photos are almost too perfect, but when they were developed the soldier does not appear in the photo.

The difficulty with cameras capturing images has been explained by the paranormal community– battlefield photographer, Alexander Gardner, moved one soldier’s body from where it had originally lain and was originally photographed near the Triangular Field to a location in the Devil’s Den, where it was posed and captioned that he was a sharpshooter. Because of this lack of respect by Gardner, the paranormal community believes that ghosts are very hostile towards photographers or, at least, their cameras.

On my first trip to Gettysburg in 1999, I was unaware of the tendency of cameras to not function properly at the Devil’s Den. We still used film cameras in 1999– not those fancy-pants digital cameras they have now-a-days. Up until that moment, my mother’s camera had been functioning properly. We exited the rental car, which my dad had parked in the parking lot at the base of the Devil’s Den. My mom immediately tried to take a photo of the impressive rocks on the opposite side of the street. The camera took the photo, but instead of a single frame, several frames of the film were exposed at one time. She went through twenty-four exposures in a matter of three or four button presses. 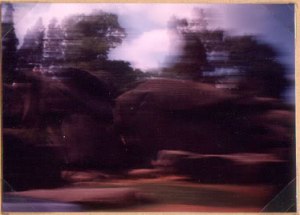 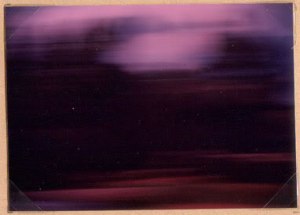 We didn’t try the camera after The Devil’s Den fiasco because we just assumed that it had broken. It wasn’t until later that evening on the ghost walk that we learned about the tendency for cameras to not function properly in this area of the battlefield. Was the camera malfunction just coincidence? Maybe. The camera was working fine up to this point; but suddenly, pressing the button to take a photo would make the film shoot forward 3-4 exposure frames at a time. The images (left) are thus streaky and blurry, so I resorted to purchasing post cards to satisfy my picture-taking needs.

When we visited the Devil’s Den, it was around 6pm in early July. The sun was starting to yellow and set. My younger sister and I were climbing the boulders, weaving in and out of the crevices and jumping from boulder-to-boulder over the fissures in the rocks. For me, it was the most fun part of the battlefield until my parents decided it was time to go.

Reluctantly, we piled into the car and drove up, around the back of the boulders. I looked out my window towards the boulders and, sitting at the side of the road, I noticed a reenactor dressed as a Union Soldier taking an afternoon nap resting against the boulders with his slouch cap pulled down. I asked my father to stop the car so we could talk to the gentleman, but he said it was getting late and we needed to get going, so he drove on.

I didn’t really think about the reenactor until we did the Ghosts of Gettysburg walking tour later that night. Our tour guide started telling about some of the hauntings associated with the Devil’s Den. She mentioned the Union Soldier who enjoys posing for photos. After the tour, we asked our guide if she knew if there were any reenactors up at the Devil’s Den that day. She said she didn’t know; but she was surprised when I described in more detail the Union Soldier I’d seen that day because it seemed to mirror details about the union soldier who enjoyed posing for photos. Unfortunately, because we didn’t stop, I don’t know if it was a reenactor or something else.

In September 2005, I revisited the battlefield with my roommates. The battlefield still held the same luster it did previously. Once again, it took 1-2 days to see what we wanted to see. I made a point of going to the Devil’s Den to take photos. Since the trip in 1999, I’d done some reading on the area. I’d heard if you ask for permission to take photographs, that you can usually have photographic success without having to purchase more batteries or another camera. So, I explained this to my roommates– telling the one with the digital camera to refrain from taking photos with her digital camera (just in case it would break– since we were poor college kids) and asked the spirits of the fallen soldiers for their permission to take photos of this area with my disposable camera. I explained that I really loved this place and wanted a photo or two to take home.

I know it sounds hokey to say in one breath that I’m a skeptic, and then to also say that I asked a bunch of dead guys permission to take pictures of where they died. I do believe in an after-life. I do believe that there are too many uncanny personal experiences at Gettysburg to say that nothing bizarre happens on that battlefield… and whether my experience in 1999 was a coincidence or not, I really did want photos of the Devil’s Den that I had taken so I was willing to do something seemingly absurd “just in case”. All of the photos I took at the Devil’s Den in 2005 turned out (though, they’re a little grainy because I took them at twilight).

After the 2005 trip I’d taken to Gettysburg, I was talking to my father about the 1999 trip. I told him that my favorite location on the battlefield was the Devil’s Den. I’d had a good time there, but I expressed my regret that he hadn’t stopped the car so I could talk to the reenactor. I inquired why he hadn’t stopped the car that day, and, very plainly, my dad told me that he didn’t stop because he didn’t see a reenactor sitting at the roadside that day.

To the men on both sides who fought valiantly at the Devil’s Den that hot July day 150 years ago today (on July 2, 1863), I give you my heartfelt thanks and gratitude that there were men such as yourselves who showed the courage and bravery in the face of death as you did that day…. and thank you for allowing me to take photos!