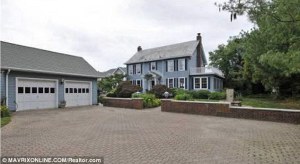 Forty years ago today in a quiet seaside village on Long Island in New York, a tragedy would occur which would be popular long after the ‘players’ were dead.

But it was not the subsequent investigation, trial and imprisonment of Ronald DeFeo, Jr which truly caught the eye of the American public, but the events at the same house nearly a year later which captured our imaginations.

Nearly a year after the gruesome events at the hands of Ronald DeFeo, Jr, George and Kathy Lutz moved into the house at 112 Ocean Avenue with their three children. They remained residents for a whopping 28 days before fleeing the home for good. Why? They claimed the house was haunted by a demonic presence.

It was this story which would overshadow the DeFeo murders and come to haunt the American psyche, especially after author Jay Anson published his book The Amityville Horror in 1977. In the book, Anson lays out all of the claims the Lutzes made regarding the house at 112 Ocean Avenue. Famed demonologists Ed and Lorraine Warren were also brought in in 1976 to investigate the claims made by the Lutzes. Their opinions are also covered in the book.

I will admit that when I first heard this story many years ago, I too fell under it’s fearful spell. But then I discovered a website about the Amityville Hoax and after a thorough reading of that website, followed by a later viewing of an old crime investigation series City Confidential which covered in great detail the DeFeos and their subsequent murders, I became convinced that it was, in fact, a hoax.

I think what happened to the Lutzes was that despite initially stating that they’d have no problems living in a house where mass murder had taken place would be no problem, I think it got to them. There’s also the fact that a large portion of the DeFeo family furniture was still in the house; part of the deal of the sale. I know from personal experience that objects in a home which bring to mind negative memories can greatly affect you psychologically. I think it simply became too much for the couple to handle and they fled. Further adding to this is the fact that no one who has lived in the house since the Lutzes fled has ever experienced anything resembling paranormal.

This is the site which convinced me of the truth of the hoax: The Hoax in Amityville

Unfortunately, I am unable to find the City Confidential episode on YouTube.