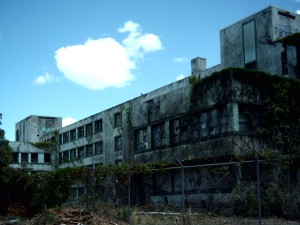 The complex that came to be known as Sunland (or Sunnyland to locals) Mental Hospital was originally the W.T. Edwards Tuberculosis Hospital when it opened in 1952.  The five story building was constructed with large banks of windows that were equipped with cranks so they could be opened easily to allow the fresh healing breezes to penetrate the patients’ rooms. Doctors tried numerous ineffectual cures for tuberculosis, many of which caused the suffering patients further misery before their inevitable demises. Eventually, after countless deaths had occurred at the facility, a vaccine was discovered to combat the killer and the hospital was needed no longer. The building’s next incarnation was as the infamous Sunland Mental Hospital.

Sunland accepted patients that suffered from mental retardation as well as psychiatric ailments.  Most patients were children who had been turned over, either willingly or unwillingly, to Florida as wards of the state. For twenty-two years, from 1961 to 1983, the hospital cared for its patients in a manner that was often indifferent and sometimes downright criminal. The hospital was one of the first in the state to use electroshock therapy to treat patients suffering from seizures. Rumors of secret lobotomies abounded, but were unfounded, as the hospital did not contain surgical facilities.

Physical abuse was reported but not followed up with proper investigations. Whispers of sexual assaults were kept quiet as well. Finally, in 1978, the Association of Retarded Citizens stood up for the long suffering patients of the hospital and filed suit alleging neglect. The lawsuit eventually forced the facility to close.

The looming structure stood empty, but not silent for the decades to follow. It became a proving ground for high school students to roam the halls in the darkest hours of the night. Transients moved in to get cover from the elements.  Slowly, tales of the activities that went forth within the “vacant” walls leaked out.

Gurneys were still heard trundling down the hallways. Children’s laughter rang out on every floor. Mysterious lights were seen in the upper reaches of the structure, visible from the roads that meandered past the facility. The running, playful figure of a little boy was spotted darting around the corner in a hallway on the third floor. Crashing sounds, as of a metal tray being thrown to the floor, have echoed through otherwise silent corridors.

The reports proved to be beyond tempting to numerous paranormal groups. Evidence in the form of temperature changes, electronic voice phenomenon, photos of orbs and actual apparitions have been documented by the groups that visited. Those seeking to communicate with spirits of children that may have been left behind brought balls and other toys to entice the entities into showing themselves.  The sound of a bouncing ball and the sight of balls rolling by themselves have also been documented in the investigation logs of some of the paranormal groups.

After years of abandonment, vandalism and trespassing, things came to a head when a 23 year old “urban explorer” was injured after a fall down an elevator shaft.  The police set up a satellite station within stone’s throw to the old hospital.  The trespassing continued, but at a slightly slower rate. Finally, the site was sold to a land developer.  The building was tented, divested of its deadly asbestos and demolished.  Now, in its place are the Victoria Grand Apartments….complete with sparkling pools, airy floor plans, work out facilities, and who knows? Maybe the ghost of a little boy who is just waiting for someone to leave out a bouncy ball for him to play with.